Rafting the Kaligandaki River in Nepal

Note from Indigo Creek Outfitters:
We first got in touch with Kim and Brian during the winter of 2011. Our staff follows their blog, So Many Places, and we find great inspiration in their adventurous spirit and stories about travel. Check them out on Facebook and follow along as they make their way around the globe.

In May 2012 my husband and I left our home in Portland, Oregon to embark on a trip around the world. The trip had no end-date and no specific itinerary. We are still traveling today.

We’ve done a lot of adventurous things over the past year but until recently we hadn’t done any international rafting. So when a bus from Kathmandu dropped us in the mountain town of Pokhara, Nepal and we found ourselves with a few days to spare before we began trekking to Annapurna Base Camp, we didn’t waste a second booking a three-day rafting trip on the Kaligandaki, one of Nepal’s holist rivers.

We met at the rafting company early in the morning and boarded a converted school bus for a two-hour ride to the river. We introduced ourselves to our fellow rafters, a group consisting of people from America, Australia, England and Scotland and a number of people, including our guide and safety kayaker, from Nepal.

I stared out the window as our bus drove deeper and deeper into the mountains along windy roads that did not seem wide enough to fit two lanes of traffic. The bright green terraces of the surrounding mountains shined in the morning light. Our bus rumbled through tiny villages where women crouched by the side of the road in colorful clothing doing the washing. 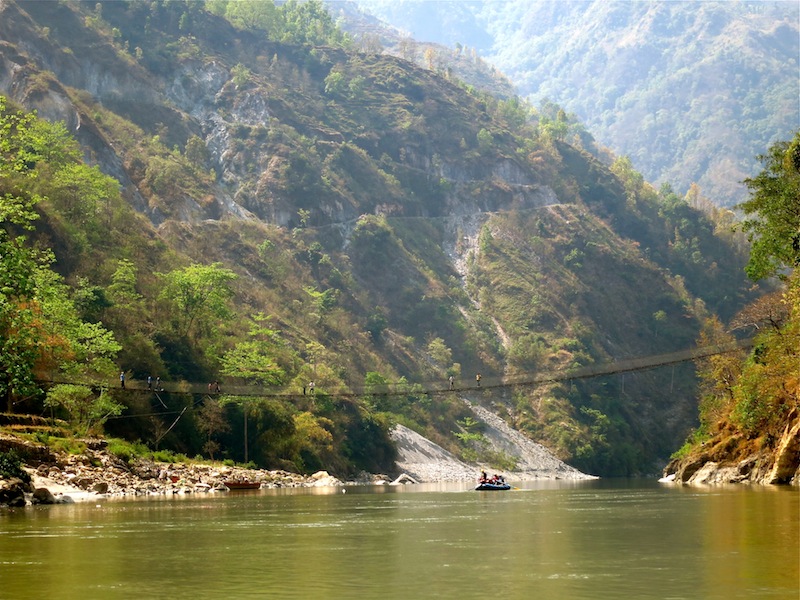 A few hours later we were on the river, floating through a stunning canyon that reached skyward, taller than the tallest building. Behind us the snowcapped Annapurna Range towered and in front of us tiny villages, inaccessible by any road, sat dotted along the banks of the river. 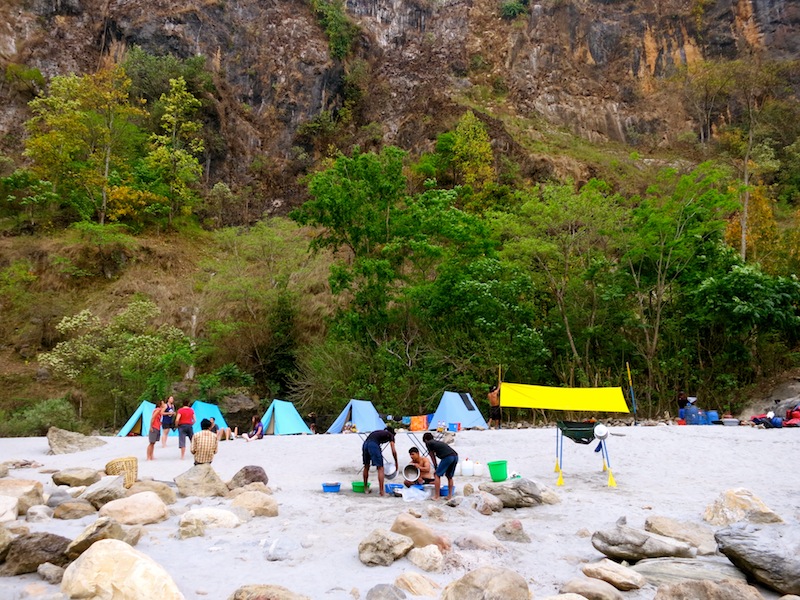 We floated past color puja, flower offerings to the Gods, and tiny temples where the villagers pray. Naked boys jumped from rocks into the river, waving and yelling “Namaste” as we passed by.

In the early evening we parked our raft by the side of the river and set up our tent for the night. The group huddled under a makeshift lean-to as a storm rolled in, and we sipped noodle soup and played cards. I found myself in conversation with a man who had summited Mt. Everest twice. I whiled away the hours listening to his stories of adventure until I grew tired and went to bed.

The next day we continued our float down the river and I sat enchanted by the rural and idyllic scenes as they passed by. The rapids were mild compared to what I’ve experienced on other rivers, but this trip wasn’t about the adrenaline rush. As I sat staring at the mountains and valleys in front of me, my paddle splashing rhythmically into the river, I realized that this trip was about something else entirely. This trip was about the people, the landscape, and the unique experience of seeing a foreign land in a way that so few get the chance to see it: from the water.

About the author: In May 2012 Kim quit her job, sold her stuff, and left home to write and travel. She writes about discovering the world and fighting like hell for your dreams on her blog So Many Places. You can also find her on twitter and Facebook.