In the fall of 2011 I spent a few weeks with Nate Moody in Salmon, Idaho. The rafting season for the Middle Fork of the Salmon and Main Salmon Rivers had come to close and winter was quickly approaching. Although we had no idea how to catch steelhead, we sure liked the process of trying (which mainly involved convincing Dana to row while we drank a beer or two and pretended to fish). In late October/early November, “steelhead” becomes the buzz word around Salmon so we felt like true locals – being able to talk about our “steelheading” – no matter how unsuccessful we were. During one of our outings we had a conversation about developing a “River Journal” magazine, in which the content would be stellar writing. We thought we’d call it the “Northwest River Journal”. It never happened, but Nate did send me this short story about a trip on the Owyhee. I’ve never shared it with anyone, but I do read it fairly frequently because I think it grasps a good sense of “why” people love floating rivers. 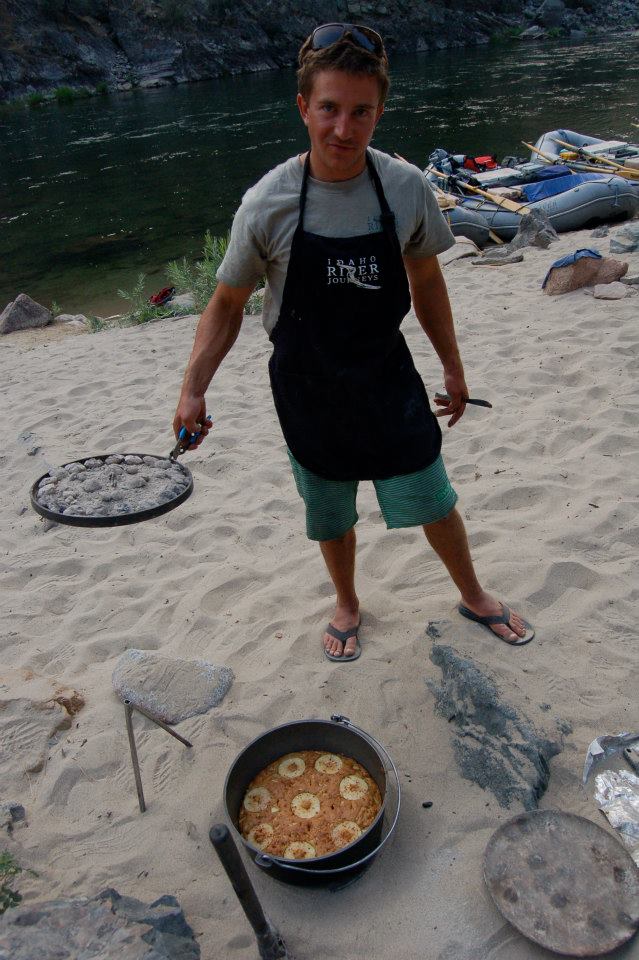 The term for the amount of water coursing through and along the banks of a confined river corridor at a certain arbitrary line is ‘CFS,’ or cubic feet a second. With the passage of a second, a small unit of time, there is truly unfathomable amounts of water streaming through all of the world’s river capillaries. It is a cycle of glaciers melting, rain and snow falling, a cycle pushing earth’s plasma always together.

For some, the world’s rivers and moving water create dissolution of the soul. Each time the roar of late spring high water comes into range from crossing over high mountain saddles or dropping into the glare and sheen of the Colorado river in a late August orange canyon, there is a fresh release of what doesn’t flow into those subtly carved water gorges. The thought of drifting on the thin film that breaks air from water creates a break from the cares of the non-elemental world. These floating souls are called boaters; this writing aims to be their river journal for those who see the rise and fall of CFS in the Northwest, or where ever, to draw vivid illustrations of new rivers, higher water and the commitment to chase the life-blood of the planet.

As a boater I feel my loose grains of soul are always being flushed together at the thought of stepping foot into new streambeds miles from home, or rowing a raft down a wilderness river inside an un-wild present age. My heartbeat rises like rain fed rivers in Oregon, and the spring runoff desert arteries of Idaho. I and many of my boating friends are nomadic mentally. We roam between the places that have CFS rising, and water rushing. I know now that the first time I heard a constant roar of water in my ears as I fell asleep on a soccer field size beach on Idaho’s Lower Salmon River that no sound or place after would pull all my thoughts into a steady current such as that.

I have since found other ‘boaters’ who heard the same gentle roar and followed their current into the same stream of only wanting to be on the water. To quote the paddling Zen master Doug Ammons, “Thing led to thing,” meaning that once the water started rushing it carried his thoughts and passion with it. It is the same with so many.

This spring I got my first chance to do the lower section of the sometimes, seasonally mighty Owyhee River. Its’ approximate 200 miles stretch from Northern Nevada, through the less dog-eared corner of Southwestern Idaho and into Southeastern Oregon. I, two of my closest friends, Montana and Katie and their parents were giddy rigging our boats at the Rome, Oregon launch site for it’s last 48 miles to Birch Creek take-out above Owyhee reservoir having never been on this stretch of water before. Rome, being named for the white, columned lakebed sediments around the vast arid desert is not as civilized as it’s namesake. There is a diner, which for all for all intents and purposes on the morning of a river launch provide all that can be asked for, Coffee and an egg and hash brown breakfast and expensive beer if anyone forgot some.

After breakfast sitting at the ramp watching other groups pull in that morning in May I realized that the river changes constantly but as humans we have to label things to categorize not only our thoughts, but also our emotions and perceptions. These thoughts and perceptions are those of boaters I saw who drove from Colorado or Utah to experience this muddied water in the middle of ‘somewhere,’ and the freshly glazed look of Katie’s parents who were enamered with the hustle and bustle. Theirs was wonder at the rushing water and the brisk spring desert smell of sage and cheat grass. It is the perceptions of the travelers from states away who are thirsty for new corners to turn and new water to pass a paddle blade over.

It is these labels that create desire, and for some boaters it is the glory of discovering new rivers, others it is the excitement of camping at remembered camps like the cave on the Lower Owyhee past Whistling Bird rapid. To me, and I think a grab-bag of my friends, rivers are only what you float on, because a river like the mighty Owyhee at a reasonable 6,000 CFS will be nothing come August but maybe a stream bed to jump over and some drying mud that swallows still hurriedly find to build their nests on the cliff-bands.

So as we floated on the swelled current in the desert I realized that all moving water is always different all the time, just like us. Looking up and down from the citadel towers of layered Basalt and Rhyolite to the murky desert run-off further on into our five-day trip I began to know how every eddy and wave had shape but no form. So I stopped rowing, stopped thinking, and listened and saw how the river carried us because of what it was, a river.